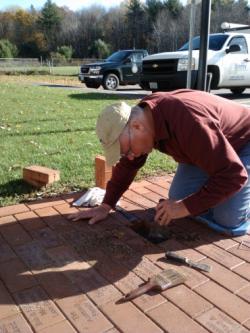 Given by Henry Pennell to Gray (circa 1880) as the new high school, this grand old building is now Gray's Town Office.  YOU can be part of this historical transformation!

Since the inception of the renovation project at the Pennell Institute, there has been an ongoing fund-raising project. In order to fund the construction of a Memorial Brick Walkway, and the Henry Pennell Municipal Complex Dedication Ceremony, engraved bricks were – and still are -- being sold.   To date $27,000 has been raised from the sale of the bricks, and in addition to the walkway itself and the Dedication Ceremony, proceeds have been used for the new town signage and the time capsule.  There is currently about $ 12,000 in the fund.  There are specific criteria for how the funds may be used, some of those uses include “projects at the Henry Pennell Municipal Complex that will enhance the overall appearance, beautification, and functionality of the facility, as well as pay, or help to pay for amenities or cultural events….”

The brainchild of Town Office Building Committee member, Don Hutchings, the Memorial Walkway was originally constructed by the renovation project contractor.  Since that time, as bricks continue to sell, they have been installed in batches.  Jeff Gilpatrick and Don Hutchings are the two volunteers who have been installing the bricks. Jeff was at the Town Office in mid-October installing the latest round. He and Hutchings have installed between 30 and 40 bricks since the original walk was constructed. The bricks are 4”X8” and can have up to three lines of text. The cost for each one is $50.