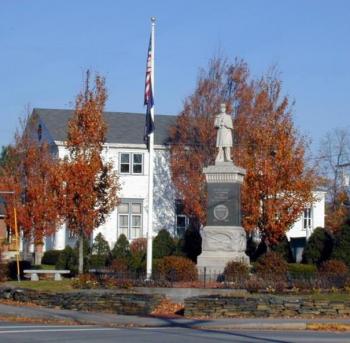 For several years, the Town of Gray has been involved in a master planning process for the Monument Square Block.  In 2010, a planning study was awarded and funded by a Community Development Block Grant (CDBG).

As part of the planning study process, the Community Economic Development Committee (CEDC) conducted a community design workshop to create a common vision and goals for the future of the block.  Participants concluded that the best future for the community and the property owners would be common access and parking in keeping with goals set forth in the Gray Village Master Plan (2006).  The results of the planning study, including conclusions from the community design workshop were drafted into the Monument Square Progress Report (2011).

Future CEDC discussions identified concerns for the character of Stimson Hall and the potential costs (estimated cost was $400-$500K) of renovating the building to preserve it from decay and demolition.  To address specific concerns related to the future of Stimson Hall, the CEDC convened a moderated public forum in July of 2011.

A request for funds to do an engineering study to determine the full extent and costs of renovations needed to preserve Stimson Hall were not approved.  Stimson Hall, as well as the old Town Hall and Post Office, were put on the market. 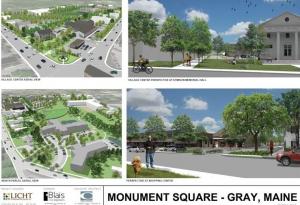 In the Fall 2011, the Liberty Family Foundation (LFF) approached the Town with an offer to fund the renovation of Stimson Hall, upgrade the existing Little League facilities, and establish a community park for Gray Village on the Town-owned Shaker Road properties.

The LFF and several property owners agreed to sign a non-binding Letter of Agreement (LOA).  The purpose of LOA was to establish the intent and commitment of the LFF and the willingness of the Town of Gray and other property owners to participate as needed to achieve success.  The framework of a public-private partnership to accomplish the goals of all parties was set forth in Exhibit D of the Agreement.

As the process outlined in the LOA continues to proceed, the Town continues to consider offers on the Town-owned properties. 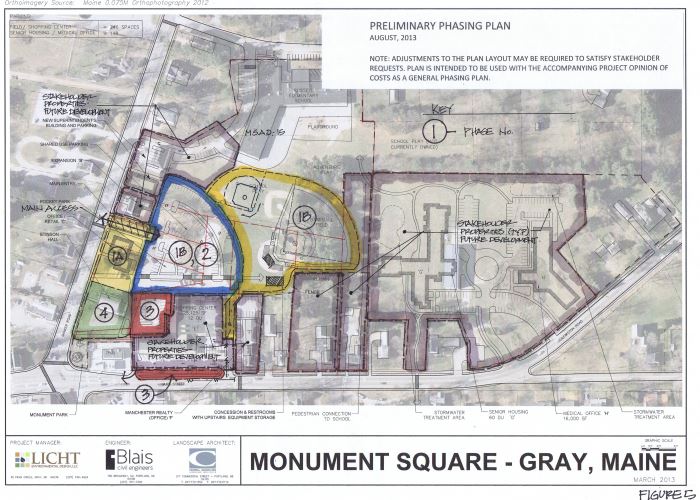 At the October 1, 2013 Town Council Meeting, the council determined the Monument Square project should move forward and that Community Development Block Grant (CDBG) funding could be a potential funding mechanism.

At the December 3, 2013 Town Council Meeting, the council approved two CDBG Pre-applications.  One included Phases 1 & 2 and the other included all four Phases.  This allowed a placeholder for either option upon final submission in January 2014.  The hope was to complete the entire project, but was dependent on the final Master Plan, costs and stakeholder commitment. 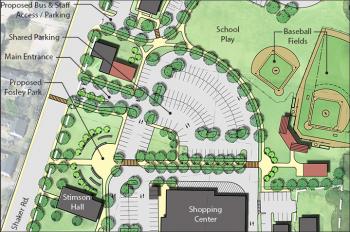 Upon receiving stakeholder support, final Master Plan and costs for the project, the Town Council approved the 2014 CDBG application which included all phases at the January 21, 2014 Town Council Meeting.  The Master Plan had a couple of changes from earlier versions.  The Liberty Family Foundation (LFF) offered to purchase the old town hall and post office from the Town of Gray.  The plan was to deed the parcels back to the Town of Gray with one restriction – it would remain in perpetuity as a community green space instead of a future location for a commercial building.  This meant that the parking lot could also be reduced, yet still be sufficient for the surrounding activities.

Even though Gray’s 2014 CDBG application was strong, it was not selected for funding due to the competitive nature of the program.  However, the LFF, Town of Gray and other stakeholders remained committed to the Monument Square Master project.  The Town Council planned to include Town’s portion of Monument Square funding as part of the warrant articles for the June 2014 election, provided stakeholder signatures on a “binding” agreement would be received by the April 15, 2014 Council meeting.  Voters would have the opportunity to approve the municipal commitment of $325,000 towards the overall project cost. 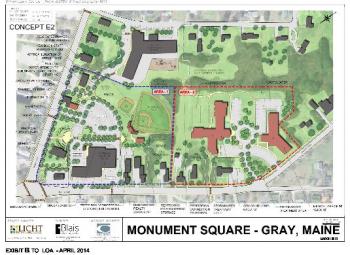 At the April 15, 2014 Town Council Meeting, the council was scheduled to vote on various motions pertaining to the Monument Square project, specifically the: Monument Square Master Plan; the DRAFT Limited Development Agreement (LDA); the Maintenance Agreement between the Town of Gray and the GNG Little League; and the Warrant Articles which included the $325,000 dedicated to the project.

Every attempt was made to get all the required stakeholder signatures on the Draft LDA by the Council meeting.  Unfortunately, not all stakeholders were able to sign the LDA by the deadline.  As a result, the Council decided “not to act” on the first three motions.  The motion regarding the warrant articles was amended to remove Monument Square funding prior to the Council taking a vote.

The Monument Square Master Plan project is currently on hold.