The Stranger from Troy R. Bennett on Vimeo.

Pleased to have been asked by the Maine Living History Association if he could help them draw attention back to May 30, the formerly sacred "Decoration Day" (replaced with the most convenient Monday now known as Memorial Day); David offered to clear his schedule, take his guitar, and play the song he wrote, a tribute to America and its fallen, "The Stranger" on May 30th at the grave of the stranger in Gray. 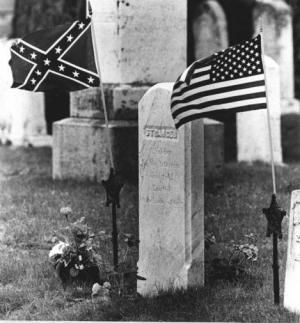 During the U.S. Civil War, Lt. Charles H. Colley of Gray was mortally wounded at the Battle of Cedar Mountain. His body was sent home for burial. However, when the casket arrived home, it contained the body of an unknown soldier in a gray Confederate uniform. Unable to correct the mistake, and believing that the young man's family would want him to have a proper burial, the soldier was laid to rest in the town cemetery, and a group of local townswomen arranged to have a stone placed on his grave.

The people of Gray could have sent the Stranger away. They had reason to. The small town of Gray sent proportionally more sons to the Civil War than any other town in Maine. More than 178 Union soldiers are buried the Gray Village Cemetery. But touchingly, there is also one Confederate, the Unknown Soldier, brought into the heart of the town in the midst of that terrible war. The people of Gray always remember the grave of the Stranger on Memorial Day with a Confederate flag.

Reprinted from "The Stranger in a Gray, Maine Cemetery" by Dick Eastman of Eastman's Online Genealogy Newsletter.

The story of the Confederate Stranger buried in Gray Village Cemetery has been told countless times.  It begins with the war-time death of young Lieutenant Charles H. Colley on September 20, 1862.  His family requested that his remains be returned to Gray for burial, only to find a stranger in the casket upon arrival.  Having no name nor known family, the stranger is then buried in Gray Village Cemetery, where he remains today.  The story usually ends with the return of Lt. Colley’s body some weeks later, to be buried nearby.

Except… it seems that the story may NOT have really ended that way.

Charles H. Colley enlisted in Company B, Maine 10th Infantry Regiment on Oct 4, 1861 and was promoted to Full 2nd Lieutenant on 18 Sep 1862, just two days before he “mustered out” on September 20, 1862 at Alexandria, VA. War department records indicate that he was buried in Section A, Site 325 of Alexandria National Cemetery on the very day of his death.  Two phone calls to Alexandria National Cemetery and a return email confirmed that Lieut. Colley rests at Alexandria to this day.  Their records DO NOT show that he was disinterred and returned to Gray as the story tells.

Does this mean that the marker placed in Gray Village Cemetery with the name Lieutenant Charles H. Colley could, in fact, be yet another unknown soldier?   Or, is it simply a cenotaph? Or, perhaps there is more to this story, after all?